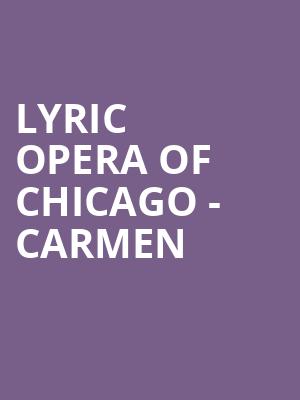 Photo by Sophie Dale on Unsplash

Love her at your own risk

With a libretto by Henry Meilhac and Ludovic Halevy and of course, a sizzling score by Georges Bizet, Carmen first premiered in Paris in 1875 and has come to be regarded as one of the art form's greatest achievements. The ultimate tale of a free-spirited heroine and how her ruthless behavior leads those around her astray - including the quiet, sensible Don Jose, who cannot control being seduced into chaos. Starring J'Nai Bridges in her Lyric Opera of Chicago debut!

The opera follows Carmen, a fiery, provocative gypsy woman at odds with the conventions of Spain in the early 18th century. Able to seduce men with her dulcet tones and feminine wiles, Carmen ensnares the heart of Don Jose, who drops everything, including his betrothed Micaela, to be with her. When Carmen tires of her latest conquest, she leaves him for the handsome bullfighter Escamillo, setting off harrowing and ultimately fatal events fuelled by jealousy, obsession, and murderous rage.

Sung in French with titles in English

Seen Lyric Opera of Chicago - Carmen? Loved it? Hated it?

Sound good to you? Share this page on social media and let your friends know about Lyric Opera of Chicago - Carmen at Civic Opera House.