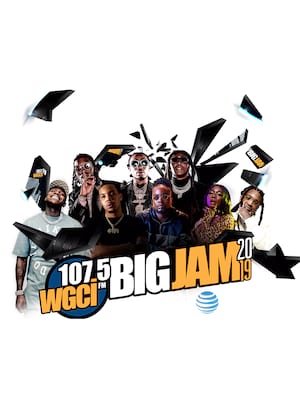 Migos is a rap trio at the height of their pummelling power, shaking the room multiple times and mustering a sea of camera-phones for at least half a dozen tracks.

The Windy City's number one station for the hottest Hip Hop and R&B jams 107.5 WGCI FM will set winter temperatures to sizzling during the return of their annual Christmas concert WGCI's Big Jam. This year they're pulling out all the stops with a line-up of the biggest names in the business, including Migos, Dababy, G Herbo, Wale, Megan Thee Stallion, Yella Beezy, Jacquees and Tink.

Citing influences the Hotboy and OutKast, Atlanta-based trio Migos have been redefining the Southern hip hop genre ever since their formation in 2009.  Four years later, their colossal mega hit Versace launched them to international stardom and a career filled with hits like Bad and Boujee, Look At My Dab and 'Fight Night'. Their hotly anticipated fourth studio album Culture III is due for release in early 2020.

Photo: The Come Up Show Used under Creative Commons License