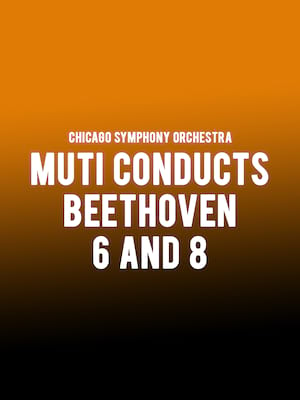 A celebration of Beethoven

In 2020 orchestras around the globe are set to mark the 250th year since the birth of Beethoven. Chicago Symphony form their own tributes with a number of special concerts heralding this momentous year, including a June program which continues their Beethoven symphonic cycle with the wonderful Symphony No. 6 and Symphony No.8. Also included is the overture to the composer's Opus 113 The Ruins of Athens.

The conductor is Riccardo Muti, Chicago Symphony's music director since 2010. Born in Naples, Italy, his glittering career has seen him earn a wealth of high international honors including Honorary Knight Commander of the British Empire bestowed by Queen Elizabeth II, the Order Of Friendship from Vladimir Putin and Knight of the Grand Cross First Class of the Order of Saint Gregory the Great, awarded by Pope Benedict XVI.

Sound good to you? Share this page on social media and let your friends know about Chicago Symphony Orchestra - Muti Conducts Beethoven 6 and 8 at Symphony Center Orchestra Hall.