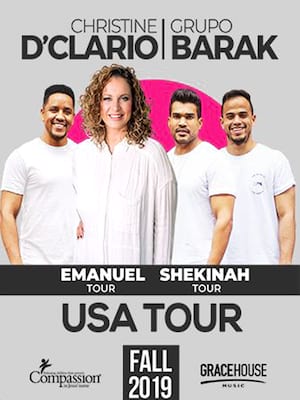 Latin worship leader Christine D'Clario is heading out on her US tour this year! As one of the world's most sought after Latin-Christian artists be moved by D'Clario's impressive vocals, catchy melodies, and joyous praise. With six albums to her name, don't miss your chance to hear all your D'Clario favorite tunes in this exclusive new tour!

Although she was born in New York Christine D'Clario moved to Puerto Rico when she was seven years old. Becoming fluent in Spanish D'Calrio released her debut and self-titled album "Christine D'Clario" in 2005. Since then the star's popularity has continued to grow with her later releases climbing up the Latin charts and even getting nominated for endless GMA Dove Awards!

Sound good to you? Share this page on social media and let your friends know about Christine D'Clario at Rosemont Theater.