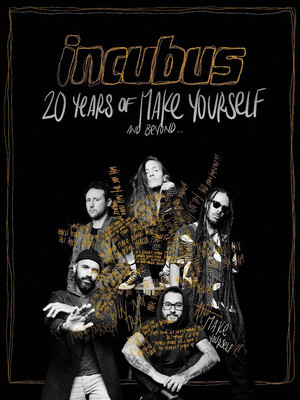 Incubus celebrate 20 years of Make Yourself!

Incubus Celebrates 20 Years Of Make Yourself

Five-piece alt-rock legends Incubus hit the road in 2019 as they celebrate the 20th anniversary of their breakthrough album, Make Yourself! Released in 1999 Make Yourself was the group's third album and saw them hit the top of the charts across the world.

The multiple platinum selling group have now released a total of eight albums and have enjoyed success across the world. Led by Brandon Boyd Incubus said, "Make Yourself was such a pivotal moment in our band and we are beyond excited to reintroduce this album to our audience while also showcasing the many musical roads it ultimately led us down."

Good set list, sound was horrible drums were buried in the mix. The band... more

Sound good to you? Share this page on social media and let your friends know about Incubus at Aragon Ballroom.