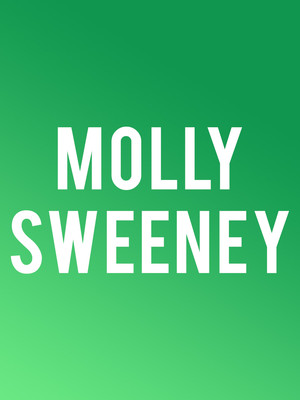 A deeply moving meditation on hope, change and despair

TEMPORARILY POSTPONED: Performances have been suspended up to and including April 19th 2020

Brian Friel's astonishing play, Molly Sweeney, returns to the stage as part of the Goodman Theatre's 2019/2020 season! Visually impaired since she was born Molly Sweeney prepares to undergo a life-changing operation. But whose life does it really change? Molly's? Her zealous husband's? Or her ambitious doctor's?

Directed by Robert Falls, Molly Sweeney is an explosive exploration of triumph and loss. Written by one of the 20th centuries most celebrated playwrights, be reacquainted with this rarely revived masterpiece of hope and despair.

A member of the Royal Society of Literature and the American Academy of Arts and Letters Brian Friel is one of theater's most decorated playwrights. The Irish born writer wrote 40 pieces, garnering him with three Tony awards, an Olivier Award, an Evening Standard Award, a New York Drama Critics Circle Award, as well as many others! Inducted into the American Theater Hall of Fame back in 2006, Friel left behind a legacy of great theatrical work upon his death in 2015.

Sound good to you? Share this page on social media and let your friends know about Molly Sweeney at Owen Goodman Theater.