Sorry! You missed Wild N Out at United Center 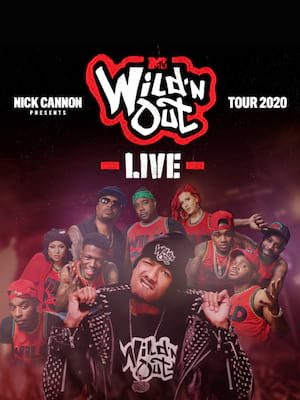 Nick Cannon brings the streets to the stage with hilarious results

Why See Wild N Out?

TEMPORARILY POSTPONED: This performance has been postponed. We will update this page once we have more information.

Wild N Out's Performers Take Each Other On Live

Nick Cannon's outrageous improv phenomenon is breaking out of your screens and heading out on tour for a run of special live shows in 2020! The multi-talented film, TV, comedy and music star has been running riot with the popular MTV series, which features two teams of comedians lead by Cannon and an A-list celebrity guest as they go head to head in lightning-fast improv rounds.

The must-see live show will mix the well-known comedy rap battle format, as well as conventional stand-up from some Wild N Out favorites and special guest performances and games. Blending hip hop culture with the ability to laugh at themselves, these performers take rhyming to new heights as they burn each other with wickedly funny takedowns and comebacks. This extra special event also features the famous Wild N Out Dancers and gives you the chance to join the cast and crew on stage!

Since its debut in 2008 Nick Cannon's Wild N Out has become one of MTV's most popular programs. Now in its 15th season, Wild N Out has featured special guests like Kevin Hart, Blac Chyna, Mariah Carey and Chance the Rapper!

Absolutely enjoyed the show. Laughed so hard I got cramps in my cheeks.... more

The show was better then expected-funny and crunk! We really enjoyed... more

Sound good to you? Share this page on social media and let your friends know about Wild N Out at United Center.