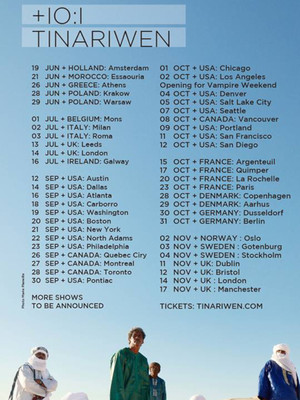 Hypnotic and dreamlike with smoky vocals, they stir the crowd into a frenzy of swaying and adulation without bludgeoning them. The audience leaves, not with its ears ringing, but rather lilting along the River Niger. It's thrilling. It's beautiful.

In a history spanning four decades and crossing generations within the group, Tinariwen was born from the Tuareg rebel community, joining together to create music exploring the struggles of the Tuareg people. They first found success outside of Africa in the late 90s, with regular tours and festivals in Europe, North America, Australia and Japan and a Grammy for 2011's Tassili. Their most recent record, 2017's Elwan, featured guest appearances from Kurt Vile, Matt Sweeney, Mark Lanegan and Alain Johannes. Prepare to be hypnotised by the musicianship of these true legends of African music.

Seen Tinariwen? Loved it? Hated it?

Sound good to you? Share this page on social media and let your friends know about Tinariwen at Thalia Hall.