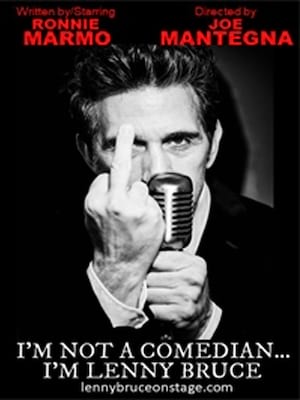 Marmo embodies Lenny Bruce with his body, heart and soul...He thoroughly commands the stage and audience from start to finish!

Fresh from wowing critics and audiences alike in Los Angeles and Off-Broadway, I'm Not A Comedian... I'm Lenny Bruce extends into 2020! Brought to life by award-winning director Joe Mantegna and actor Ronnie Marmo, the one-man tour-de-force chronicles the life and times of Lenny Bruce, a comedy legend whose fight for freedom of speech often landed him on the wrong side of the law.

Leaving no stone unturned, the funnyman infused his wry observational humor with satire and social critique, integrating it with politics, religion, sex and blue language. His penchant for poetically vulgar punchlines got him arrested and convicted for obscenity in 1964, as well as banned from several US cities. A man ahead of his time, he was awarded a posthumous pardon in 2003.

Sound good to you? Share this page on social media and let your friends know about I'm Not A Comedian... I'm Lenny Bruce at Royal George Theatre MainStage.