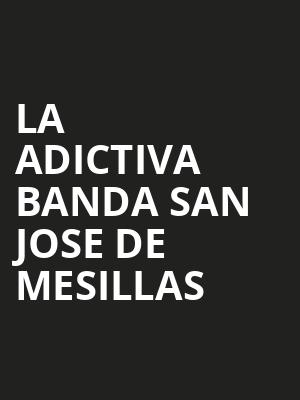 The iconic Mexican outfit hits US shores on tour

Formed in 1990 on the fertile musical ground of Sinaloa, Mexico, ever popular banda group La Banda San Jose de Mesillas has rightfully earned the reputation as one of the hardest working veteran groups in the industry. The 15-strong outfit uses trumpets, trombones, tarolas, a tambora, a tuba, a clarinet and soaring vocal harmonies to put their own distinctive spin on the ranchero, quebradita, bolero and corridoss genres.

Named after the town they originate from,  La Banda San Jose de Mesillas have recorded a grand total of 13 albums thus far, revolving around a collective of different vocalists including singing sensation Claudio Alcaraz. Don't miss joyful live renditions of their greatest hits, including I Love You and I Love You, Nothing The Same and The Past Is Past.

Sound good to you? Share this page on social media and let your friends know about La Adictiva Banda San Jose de Mesillas at Rosemont Theater.