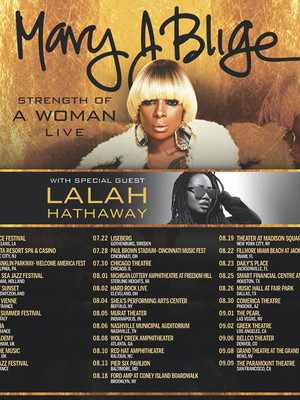 One of modern R&B's true greats

The iconic Mary J. Blige is back on the road again! Her debut album What's the 411? ushered in a new era of hip-hop back in 1992, and she hasn't stopped evolving her sound since. The recipient of nine Grammy Awards (and nominated for a further 21), her powerful fusion of soul and hip-hop has produced innumerable classics, including 'Family Affair,' 'My Life,' 'Real Love,' and 'Be Without You'.

Her 2017 album, Strength of a Woman, was a typically raw and powerful effort that boasted a very starry guest list, including Kanye West and Missy Elliott. Since then this Bronx-born queen of the mic has launched a joint tour with Nas AND been awarded the Lifetime Achievement Award at 2019's BET Awards! Catch Mary J. Blige when she performs near you soon!

Sound good to you? Share this page on social media and let your friends know about Mary J. Blige at Ravinia Pavillion.