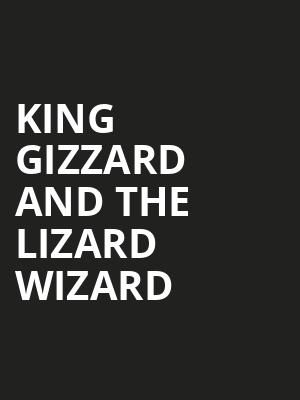 King Gizzard and The Lizard Wizard

Why See King Gizzard and The Lizard Wizard?

The Future of Psychedelic Rock

With a name like King Gizzard and the Lizard Wizard, it's safe to say that the Australian psychedelic rock outfit marches to the beat of their own cosmic drums. Known for their incredible work ethic, the band have a whopping 13 albums to their name. Hot off the back off their newest record 'Infest The Rat's Nest' the seven-piece head out on their biggest tour yet!

Best known for releasing five albums in one year (!) the celestial septet are known for their high octane, no-holds-barred live shows, infusing the euphoria of their swirling, epic jams with boundless, electrifying energy. Enter a mystic world once occupied by the likes of Frank Zappa, Black Sabbath, Deep Purple and Led Zeppelin, where King Gizzard blur the lines between vintage-era rock 'n' roll, prog rock and a bold vision of psych's future.

Didn't think I would be into this style, but they gave their fans a massively... more

Sound good to you? Share this page on social media and let your friends know about King Gizzard and The Lizard Wizard at Radius Chicago.