Sorry! You missed Bullets Over Broadway at The Privatebank Theatre 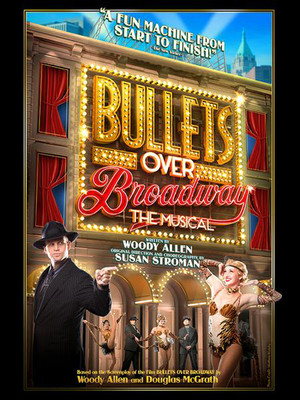 An uproarious giddy feast. Boy does it hit the spot!

Why See Bullets Over Broadway?

Jazz Hands at the ready!

Set in the glamorous world of the Roaring Twenties, Bullets Over Broadway was 2014's fizziest new musical, and now it's heading out on tour. Telling the story of a Broadway play's production that becomes entangled with the mob, this show is packed full of chorus girls, pin-stripes, rat-a-tat dialogue and dazzling Art Deco design.

The show is the brainchild of Woody Allen, who adapted the story from his Academy Award-winning film of the same name. It was directed and choreographed for the stage by five-time Tony winner Susan Stroman (The Producers) and contains a jukebox of classic tracks from the era, including I'm Sitting On Top of the World, Let's Misbehave and the Tiger Rag.

What is Bullets Over Broadway About?

Playwright David Shayne is struggling to make ends meet, so when he gets the opportunity to put his show on Broadway he jumps at the chance. The only catch? The production is being bankrolled by mobster Nick Valenti, who demands that his thunderingly untalented showgirl girlfriend Olive Neal play the lead role. Couple this with the slight issue of Shayne's play not being too great in the first place, and you have a 24 carat-gold Broadway flop on the cards - and Nick Valenti does not like flops! Fortunately, Olive's bodyguard Cheech has a few suggestions that might just avert disaster.

Recommended for Ages 13 and Up.

2 Hours and 30 Minutes (Including Intermission)

Seen Bullets Over Broadway? Loved it? Hated it?

Sound good to you? Share this page on social media and let your friends know about Bullets Over Broadway at The Privatebank Theatre.