Sorry! You missed Tinashe at House of Blues 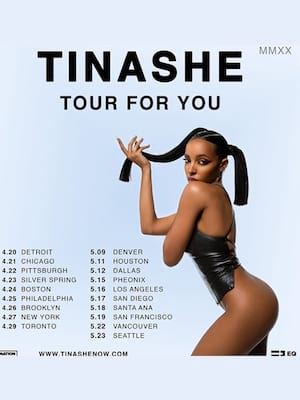 See this diva-in-waiting ascend to the throne!

RnB diva-in-waiting Tinashe is bringing her smooth and scintillating blend of sparse beats, soulful vocals and radio-ready grooves on a tour of the US, in celebration of her fourth album, "Songs For You". Released independently late in 2019, "Songs For You" hit the top 20 of the album charts and features hit tracks, "Touch & Go" and "Save Room For Us".

As well as presenting her new music expect to hear Tinashe perform her chart-topping hits, "2 On", "Pretend" and "All Hands On Deck" on this 18 date tour.

The young songstress is hugely accomplished for someone of her age; she's a writing, producing, singing and dancing quadruple threat, not to mention her acting along side Tom Hanks in the animation film Polar Express and a stint on Two and a Half Men. She's set her sights on world domination, and with such an inspired work ethic it won't be long before Tinashe is a household name.

Seen Tinashe? Loved it? Hated it?

Sound good to you? Share this page on social media and let your friends know about Tinashe at House of Blues.