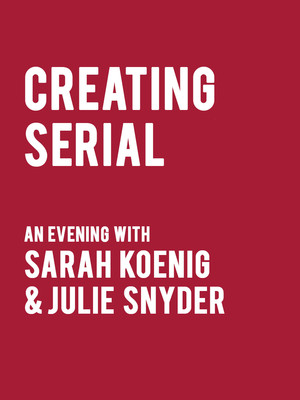 One story, a true story, over the course of a season.

Undoubtedly one of the most influential podcasts in recent years, Serial boosted the prevalence of the now flourishing true crime genre, winning a Peabody Award in the process. A measured and thoroughly detailed documentary series that covers one case a season, Serial's creators, Sarah Koenig and Julie Snyder now take to the road to bring you an evening where they'll be discussing the show, its subject and its impact in a fascinating live event.

Launching in 2014, Serial's first case gripped the world as Koenig and Snyder sought to examine the story of high-schooler Hae Min Lee and her terrible murder in 1999. Over the course of 12 episodes, their investigation into her accused murderer led to the man's case being re-opened. As of September 2018, this season and the two subsequent have been downloaded 340 million times. So, if you're stuck on all things Serial, this in one opportunity you won't want to miss.

Sound good to you? Share this page on social media and let your friends know about Creating Serial - Sarah Koenig and Julie Snyder at The Chicago Theatre.