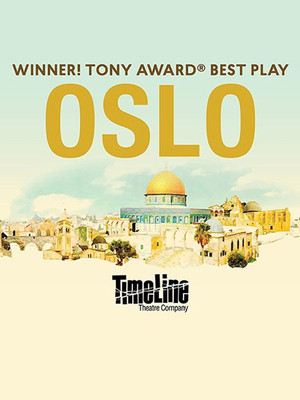 J. T. Rogers's "Oslo" an against-the-odds story of international peacemaking, is undeniably a big play, as expansive and ambitious as any in recent Broadway history.

Following a Tony Award-winning Broadway run and critically lauded West End stint in 2017, J. T. Rogers' powerful political thriller is brought to life in Chicago in the hands of local non-profit theater company TimeLine. Showing at the Windy City's Broadway Playhouse for a strictly limited four week run this fall, the city-wide premiere puts faces and lives to the names that populate our history books, especially those behind the previously confidential, true-life negotiations of between Israel and the Palestinian Liberation Organization in the run up to the Oslo Peace Accords of the early 1990s.

Whilst set against a sweeping historical landscape, Rogers' story is deeply personal, inspiring and surprisingly funny. It centers on Norwegian sociologist Terje Rod-Larsen and his foreign diplomat wife Mona Juul, two seemingly normal people who would become the quiet heroes of the Oslo negotiations. Able to bring people together in secretive back-channel manoeuvresc, Terje and Juul facilitated high level communications with the Norwegian Prime minister and what began in a castle in a forrest outside of Oslo ended in a symbolic handshake between Israeli Prime Minister Yitzhak Rabin and Chairman of the Palestine Liberation Organization Yassar Arafat.

2 hours and 45 minutes with an intermission

Seen Oslo? Loved it? Hated it?

Sound good to you? Share this page on social media and let your friends know about Oslo at Broadway Playhouse.