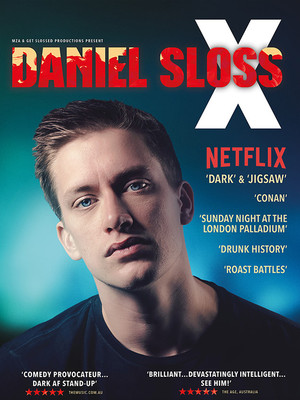 From the depths of Scotland comes Daniel Sloss, a star in the making if there ever was one. As one of the world's youngest comedian successes, Sloss performed his first solo West End run at the age of 16. At 28, Sloss has achieved two Netflix specials, four solo off-Broadway runs and now he heads out on his biggest tour date, Daniel Sloss: X.

Sloss has his mother to thank for some of his stratospheric success, when she met world-renowned comedian Frankie Boyle who granted Sloss some work experience on the UK TV show, Mock The Week. After attending a two day stand-up course Sloss headed to the prestigious Edinburgh Fringe Festival for the first time in 2008. It was 2010's Fringe run of Daniel Sloss: My Generation which saw the young star sell out the entirety of his run before transferring the show to London's West End. Since then, Sloss has dominated the Edinburgh Fringe and has appeared on some of the UK's biggest TV comedy shows as well as taking part in Comedy Central's Drunk History.

Sound good to you? Share this page on social media and let your friends know about Daniel Sloss at Athenaeum Theater.