Sorry! You missed Logic at All State Arena 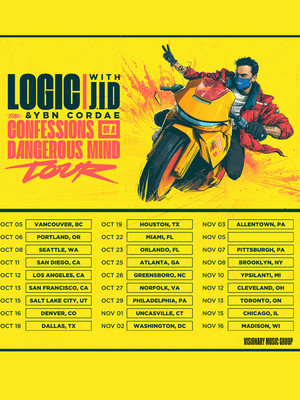 Confessions of a Dangerous Mind hits the road!

The confessions of a dangerous mind tour!

One of the newest young rappers to hit the scene, Maryland-based Logic accrued a huge internet following with his self-released mixtapes before signing with Def Jam in 2010. After releasing his third studio album, Everybody, in 2017 which catapulted into the number three spot on the Billboard Hot 100, Logic has gone on to drop his fifth studio album, Confessions of a Dangerous Mind, which will be featured on his upcoming tour!

Described as the "new Drake", Logic has already achieved a couple of Grammy nomination for his track 1-800-273-8255 and made his debut Grammy performance at the 60th Grammy Awards. Crediting his love of rap to RZA's work on the Kill Bill soundtrack, Logic also displays a huge love for the work of Frank Sinatra, and credits his classy demeanor to watching old James Bond movies.

JID and Cordane were great openers, and Logic didnt disappoint. I wish... more

Went to the Logic show in Cleveland last night. He delivered! He played... more

Sound good to you? Share this page on social media and let your friends know about Logic at All State Arena.