Sorry! You missed Blake Shelton at All State Arena

You can catch Blake Shelton at Cheyenne Frontier Days in Cheyenne, showing Jul 31, 2021

Blake Shelton is also touring to: 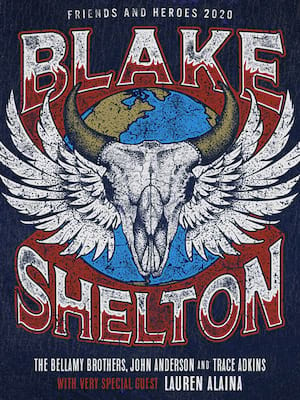 Country crooner Blake Shelton is hitting the road in 2020 with the return of his huge Friends & Heroes tour! The extensive set of dates sees the chart-topper invite some of his closest friends and biggest heroes along for the ride. Not only will you get to see Shelton perform but you'll also get to see the likes of the Bellamy Brothers, John Anderson, Trace Adkins, and Lauren Alaina all perform too!

A mainstay of the Country charts since his first-ever single, Austin, was released in 2001 (and spent five weeks at Number One) Blake is one of the genre's biggest superstars! His brand of rock-inflected Country has earned him an impressive nine CMA Awards and eight Grammy award nominations! But Shelton's talents don't end with his musicianship, he also features as a coach on NBC's The Voice talent show, as well as starring and providing the voice of Earl in the Angry Birds movie.

We loved the concert. From start to finish it was worth every penny.... more

Sound good to you? Share this page on social media and let your friends know about Blake Shelton at All State Arena.