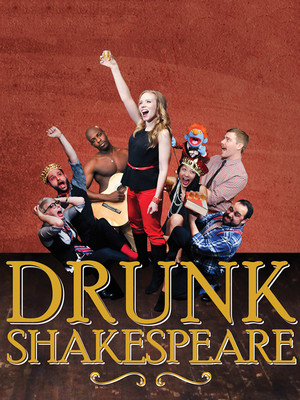 GET THEE TO THE BAR!

Use code DRUNKCITY at checkout for your discount

More performances of Shakespeare than any other company in NY!

Use code DRUNKCITY at checkout for your discount

Take a journey to the mysterious hidden speakeasy behind the Chicago Theater. Enter through a locksmith's shop and discover a glam cocktail bar and library where the infamous Drunk Shakespeare Society are ready to perform!

Oddities abound in this clandestine corner, not least the display of one hundred books, forever encased in amber fluid beside a royal throne...

But the main event really begins when one actor takes to the stage after at least five shots of whiskey...and attempts to perform an entire play by William Shakespeare. Notoriously tongue-twisting when dead sober, Drunk Shakespeare takes the bard in a whole new direction. So grab a drink, sit back and enjoy a totally unpredictable and riotously hilarious evening!

Created by Scott Griffin and David Hudson, this critically acclaimed show takes the bard in a whole new direction.

Only one can be King  (or Queen). Learn more about the exclusive King experience at Drunkshakespeare.com

TICKETS AS LOW AS

*Offer subject to availability and black out dates. Not all seats discounted. Discount code valid for $39 Balcony, $59 Mezzanine & $79 Stage-Side seats only.  All purchases with credit/debit, including online / phone orders, will incur a $4 processing fee. Schedule & cast subject to change. No exchanges or refunds, all sales final. Cannot be combined with other offers. Not valid for prior purchases. Ages 21+ only.

HEALTH WARNING: We do not condone excessive drinking. Our actors have a regular rotation system and are carefully monitored at all times. Drinking in moderation can be fun. Drinking to excess can ruin your life. We promote healthy drinking.

Sound good to you? Share this page on social media and let your friends know about Drunk Shakespeare at The Lion Theatre.