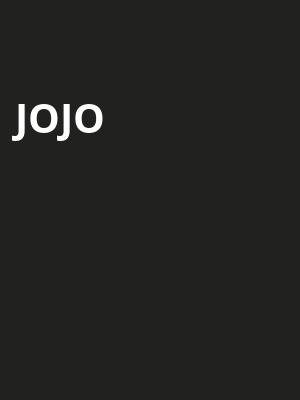 Back where she belongs... in the spotlight!

Millennials rejoice! Our teen hero JoJo is back where she belongs... out on tour with brand new music! The pop songstress is back with brand new music in the shape of her most recent project, "Trying Not To Think About It" as well as last years "Good To Know". In celebration, the early naughties icon is hitting the road with an extensive North American tour!

Bursting into the music scene in her early teens, her iconic track, "Leave (Get Out)" being released when she was just 13 (!), JoJo became a veritable overnight sensation. Releasing her self-titled debut album in 2004 the record garnered the young star her first Platinum record. This success was mirrored with her second album, 2006's "The High Road", which hit the number 3 spot in the US charts!

After a mixed few years which were full of career confusion and personal struggles, although it did result in her third album "Mad Love", our pop princess is back and better than ever! Don't miss your chance to hear tracks like "Too Little Too Late" and "Baby It's You" live when JoJo arrives in tour town!

A woman of many talents, JoJo hasn't just dabbled in music! Throughout her career JoJo has frequently appeared on the silver screen, including 2006's Aquamarine alongside Emma Roberts and Sarah Paxton and 2013's G.B.F.

Seen JoJo? Loved it? Hated it?

Sound good to you? Share this page on social media and let your friends know about JoJo at Vic Theater.