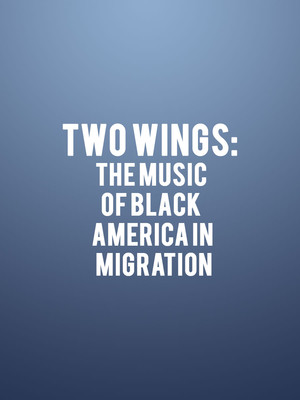 Two Wings: The Music of Black America in Migration

With two accomplished musicians at the helm, and with such a diverse body of music to draw on, the aesthetic and sensory possibilities presented by Two Wings are endless.

Why See Two Wings: The Music of Black America in Migration?

The Music Of The Great Migration

After stunning audiences at Carnegie Hall in March of 2019, husband and wife duo Jason and Alicia Hall Moran bring Two Wings: The Music of Black America in Migration to the Windy City as part of the Symphony Center Presents Jazz concert series premier. Ambitious in scope, the duo's musical project tells the important story of the Great Migration, a period in American history taking place from 1916 to 1970 in which six million African Americans migrated from the south to the North in search of a better life free from prejudice, lynchings and the Jim Crow laws.

The Morans chronicle this period of great upheaval and subsequent creativity through the music that evolved out of it, from the gritty blues of Chicago to the virtuosic bebop Of Kansas City, smooth Motown of Detroit, groovy soul of Philadelphia, bouncing hip hop of New York and swinging rhythms of Harlem. A MacArthur Fellow, Jason Moran is a widely acknowledged jazz master, composer and pianist, whilst Alicia Hall Moran is a celebrated mezzo-soprano singer who recently wowed audiences in the latest Broadway revival of Porgy and Bess.

Sound good to you? Share this page on social media and let your friends know about Two Wings: The Music of Black America in Migration at Symphony Center Orchestra Hall.