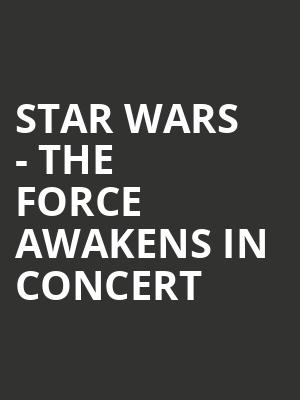 Photo by Jeremy Thomas on Unsplash

It packs a planet-sized punch, launching a new generation of characters who - by the end - take a place next to Han, Leia and the rest. Star Wars is back, and this is just the beginning.

Why See Star Wars - The Force Awakens in Concert?

A Live Screening Of The Force Awakens

On May 25th 1977, George Lucas and his team of designers, special effects wizards and film making professionals unveiled an ambitious science fiction epic that would quickly become a blockbuster franchise beloved by millions of fervent fans. A bonafide pop culture phenomenon, the Star Wars series was revived almost four decades later with the  2015 release of The Force Awakens, re-igniting the world's fascination with lightsabers, Jedi warriors and the dark side.

Experience the thrilling film with added aural splendour during a special live HD screening of The Force Awakens with live orchestral accompaniment. Continuing where Return of The Jedi left off, the action-packed adventure is set 30 years after the defeat of the evil galactic empire. Rising from the empire's ashes, the First Order poses just as great a risk, oppressing the innocent and destroying whole planets. Enter feisty young heroine Rey, a Jedi hopeful whose fate is bound with the evil Sith Lord Kylo Ren.

Seen Star Wars - The Force Awakens in Concert? Loved it? Hated it?

Sound good to you? Share this page on social media and let your friends know about Star Wars - The Force Awakens in Concert at Symphony Center Orchestra Hall.