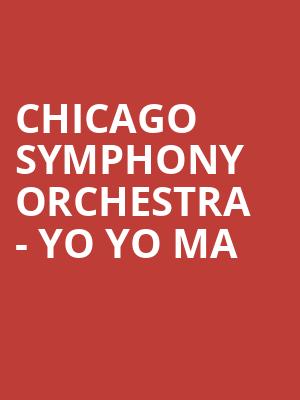 Chicago Symphony Orchestra - Yo Yo Ma

Why See Chicago Symphony Orchestra - Yo Yo Ma?

A Performance from one of the world's greats

Spend an evening in the company of one of the world's most pre-eminent instrumentalists, as the celebrated cellist Yo-Yo Ma joins the Chicago Symphony Orchestra to perform Edward Elgar's contemplative Cello Concerto, conducted by the influential Mexican-born conductor Carlos Miguel Prieto.

Child-prodigy turned adult-superstar cello virtuoso Yo-Yo Ma is a much loved and respected figure in the modern classical scene. Born in Paris to Chinese parents who were both distinguished musicians in their own right, Ma was raised in New York and attended Julliard, Columbia and Harvard. The illustrious musician has featured on soundtracks by John Williams and Ennio Morricone and his talent has seen him serve on the President's Committee on the Arts and Humanities. This will be an opportunity to witness a true master at work.

Sound good to you? Share this page on social media and let your friends know about Chicago Symphony Orchestra - Yo Yo Ma at Symphony Center Orchestra Hall.