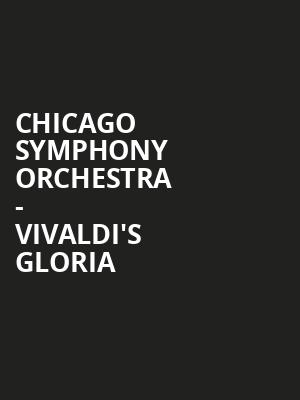 Photo by Joshua Woroniecki on Unsplash

Vivaldi's Gloria is widely considered one of the composer's most important lost masterpieces. An exultant hymn, Gloria has become one of Vivaldi's most popular pieces in the centuries after his death and is performed all over the world. Created for the girls of a Catholic Orphanage Gloria expresses the divine aspects of the violinist/composer/clergyman once known as "The Red Priest". Enjoy Gloria, conducted by Giovanni Antonini, alongside some of the composer's other treasured works; Sinfonia from La Senna festeggiante, Magnificat and Kyrie.

Lying undiscovered in a pile of his manuscripts until the 1920s Vivaldi's Gloria wasn't performed until 1939 in Sienna by composer Alfredo Casella. Although Casella changed a few sections of the original composition it quickly became a firm favorite among Vivaldi's fans. It wasn't till 1957 that the original and authentic piece was first heard by audiences.

Sound good to you? Share this page on social media and let your friends know about Chicago Symphony Orchestra - Vivaldi's Gloria at Symphony Center Orchestra Hall.