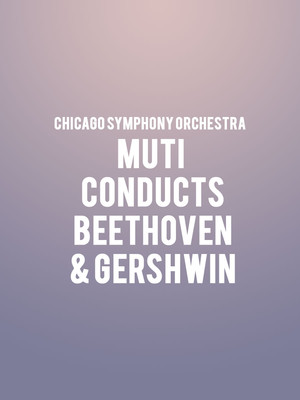 A diverse program of classical works, including a hotly anticipated world premiere, awaits!

Join celebrated Italian maestro Riccardo Muti as he conducts the Chicago Symphony Orchestra and shines a light on two of the ensembles talented soloists during a program of works by Vivaldi, Benshoof, Beethoven, Stephenson and Gershwin. The Orchestra's very own dazzling piccolo virtuoso Jennifer Gunn showcases her fleet fingerwork during Vivaldi's Piccolo Concerto and Ken Benshoof's Concerto in Three Movements, whilst CSO brass hero Charles Vernon takes his instrument to new heights in the world premiere of James Stephenson's Bass Trombone Concerto.

Alongside these thrilling instrumental showpieces, the ensemble will perform Beethoven's humorous and light hearted Second Symphony, ending the program with Gershwin's jazz-tinged orchestral tone poem An American In Paris. First premiering in New York in 1928, it is celebrated for its energetic balletic flights and free-flowing rhapsodies.