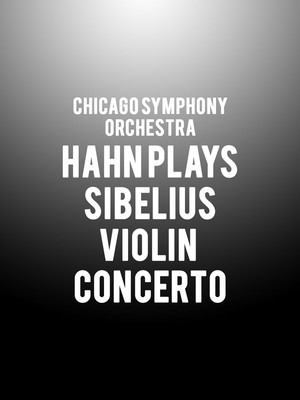 In meditative movements like the Adagio of the G Minor Sonata, Ms. Hahn takes an unabashedly Romantic approach, with slow tempos that allow her to spin out the melody in shiny ribbons.

A Trio Of Finnish Works

Finnish conductor Mikko Franck returns to the Chicago Symphony Center to lead the symphony through a program of works from his sonically fertile homeland. Things kick off with Einojuhani Rautavaara's A Requiem in Our Time, a thrilling neoclassical work for brass band and percussion written in 1853 whilst the composer was still a student, probing an early breakthrough thanks to its exquisite instrumental interplay.

This is followed by Sibelius' 1905 Violin Concerto, during which celebrated violin virtuoso American Hilary Hahn will take to the stage to flex her bow during its symphonic showpiece passages that were designed to test the mettle of even the most accomplished of players. The evening comes to a close with Rachmaninov's Symphony No. 2, considered by many to be the most lushly orchestrated and romantic symphony of all time.