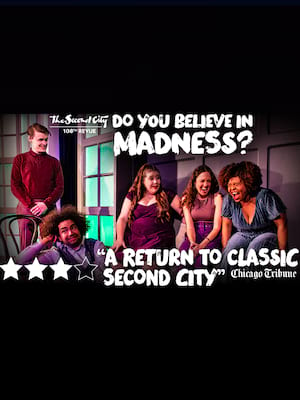 Do You Believe in Madness?

Do You Believe in Madness? hilariously examines how we're all gleefully speeding towards a modern apocalypse in this brand new revue from The Second City.

Why See Do You Believe in Madness??

The world is a strange place and with modern aids it seems to be getting weirder and weirder. Do You Believe in Madness? chronicles all of the madness that comes with living in the present day. Delving into everything from legalizing marijuana, Brexit, Facebook and what has been one of the most polarizing times in politics, this production emphasizes the importance of humor in trying times.

The play is directed by The Second City's resident director Ryan Bernier who has previously worked on the plays 'Dream Freaks Fall from Space,' 'Fool Me Twice' and 'We're All in this Room Together' for which he received a Jeff Award for Best Director.

Seen Do You Believe in Madness?? Loved it? Hated it?

Sound good to you? Share this page on social media and let your friends know about Do You Believe in Madness? at Second City - Mainstage.