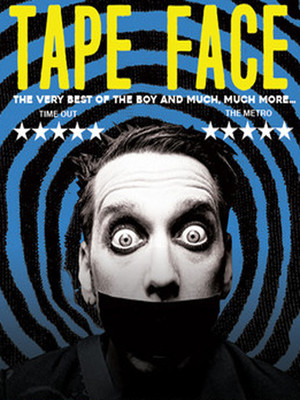 Unique vaudeville from the breakout star of America's Got Talent

As Seen on America's Got Talent

After making waves in the UK and his native New Zealand, Tape Face (real name Sam Willis) finally came to America's attention on the eleventh season of America's Got Talent, where his utterly unique act took him all the way to the final.

Taking to the stage with a piece of gaffer tape across his mouth, Tape Face brings silent comedy into the 21st century with his inventive blend of prop comedy and vaudeville. His act, which frequently involves members of the audience, makes use of everything from plungers to oven gloves to create bizarre, and strangely beautiful, routines that you'll never see anywhere else. For instance, during his time on America's Got Talent, he duelled against an audience member with staple guns and balloons, and brought judge Heidi Klum up on stage to recreate the pottery scene from Ghost with some silly putty. Catch Tape Face when he hits in , ,

Brian Andrews: “Tape Face Is A Sure Thing On The Strip!”

Now I will preface this review by stating my wife and I are huge Tape... more

Erin: “Tape Face Knocked it out of the Park”

We recently saw Tape Face at the Tarrytown Music Hall and were so pleasantly... more

Sound good to you? Share this page on social media and let your friends know about Tape Face at Park West.