Sorry! You missed The Curious Incident of the Dog in the Night-Time at Oriental Theatre 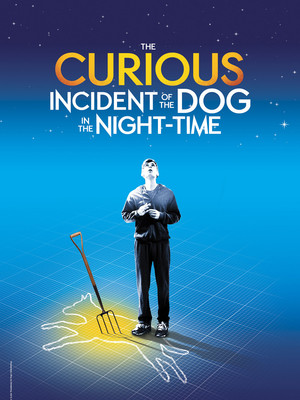 The Curious Incident of the Dog in the Night-Time

This is one of the most fully immersive works ever to wallop Broadway.

Why See The Curious Incident of the Dog in the Night-Time?

the tony-award winning hit on tour!

Something extra special is hitting the road in the 2016/17 - the national tour of the sensational adaptation of Mark Haddon's 2003 novel: The Curious Incident of the Dog in the Night-Time. This National Theatre of London production won an incredible five Tony Awards in 2015, including Best Play.

We follow the story of Christopher John Francis Boone, a teenage math genius with Asperger's syndrome, for whom the untimely death of his neighbor's dog begins an inventive and beautifully staged journey that takes the audience into Christopher's world, in a deeply-felt performance that translates his unique perspective of the world, and the wonders of life.

What is A Curious Incident About?

When 15-year old Christopher finds himself at the scene of a crime, namely the murder of his neighbour's dog Wellington in his owner's garden (at seven minutes past midnight), he finds himself a suspect due to his Asperger's condition. So he embarks on an extraordinary journey across the country that pits this amateur detective against the murder mystery culprit, and forcing him into conflict with his family, his dreams and his ambitions, with a triumphalist spirit that will uplift and keep you thinking long after you've left the theater.

Upon its release in 2003, author Mark Haddon's original won over 17 international literary awards and is notable for reflecting Christopher's love of prime numbers by using this to number the pages, instead of regular numbering.

Suitable for audiences aged 13 and upwards

Two hours and 40 minutes including one interval

Kathleen: “The Curious Incident of the Dog in the Night-Time”

Anonymous: “If at all Possible, See This Wonderful Show!!!”

Our ages range from 10 to 71 and we all were amazed by performance, characters,... more

Sound good to you? Share this page on social media and let your friends know about The Curious Incident of the Dog in the Night-Time at Oriental Theatre.