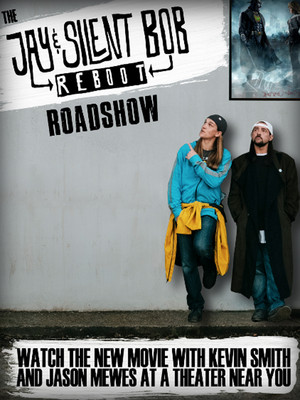 Hitting the road with their unique brand of foul-mouthed fun!

Why See Jay and Silent Bob?

A true pop culture icon duo, the two 'refugees from the '90s' and wastrels of comedy films such as Clerks, Mallrats, Chasing Amy, Dogma, Jay and Silent Bob Strike Back and Clerks 2 hit the road in 2020 in support of their newest movie - Jay and Silent Bob Reboot.

Telling the story of the peculiar pair as they set out to stop Hollywood making a reboot of one of their old movies, the evening will include a screening of the star-studded film and a Q & A after.

The creations of Kevin Smith and Jason Mewes, fans have invariably grown up with the foul-mouthed duo (okay, Jay) and watching how their lives have developed in and outside the Askiewverse. Ranging from movies to video games, music videos to podcast, the duo have cropped up all over the place with their hilarious interpretations and antics. Now ready for a new chapter, don't miss Smith and Mewes as they bring the roadshow to you!

Seen Jay and Silent Bob? Loved it? Hated it?

Sound good to you? Share this page on social media and let your friends know about Jay and Silent Bob at Music Box Theatre.