Sorry! You missed Something Rotten at Marriott Theatre 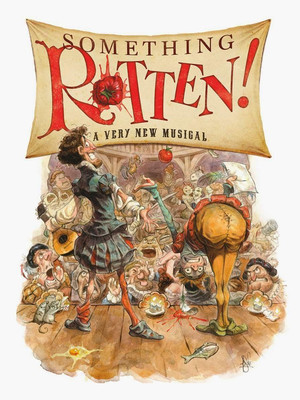 The Funniest musical comedy in at least 400 years!

Why See Something Rotten?

Shakespeare's Rivals Create the World's First Musical in 'Something Rotten'

The 10 time Tony Award-nominated musical Something Rotten comes to Chicago's Marriott Theatre. The hilarious musical comedy which sees two brothers create the world's first musical was a hit as soon as it premiered.

When brothers Nick and Nigel Bottom want to create a hit play, better than anything that poser William Shakespeare has produced! On consulting a local prophet, they discover that their masterwork will be made up of simultaneous singing, dancing and acting - the world's very first musical! Will this new artform put the Bottom brothers on the map, or are they destined to play second fiddle to Shakespeare forever? Don't miss this buoyant and silly musical full of jokes, laughter and just a tiny bit of romance!

this is an entertaining play that we thoroughly enjoyed. we will probably... more

Sound good to you? Share this page on social media and let your friends know about Something Rotten at Marriott Theatre.