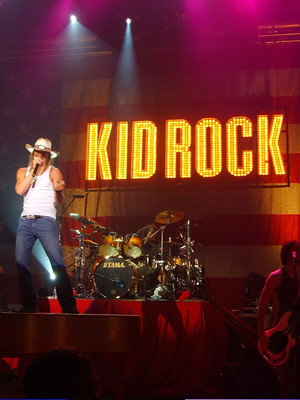 Don't miss Kid Rock live at a venue near you!

Rockin' out on Tour

The former Mr Pamela Anderson has won Grammys galore due to his edgy brand of rap-rock that has made him one of the most popular rock artists of the last decade. Kid Rock is best known for hits like 'Cowboy', 'Only God Knows Why' and 'All Summer Long'. His fourth album, Devil Without a Cause, was his first noteworthy commercial success - it was released in 1998 and sold over 13 million copies world wide.

Musical talents aside, Kid Rock is also widely known for his run ins with the law and feuds with other rich and famous personalities. In 2007 he pleaded guilty to assaulting tattooed (and equally volatile) drummer Tommy Lee! Despite this somewhat shady past, Kid Rock is actively involved in several charities and has performed for service women and men at army bases in Afghanistan and Iraq.

Kid came out with high energy for his show and his fans. I am born and... more

Sound good to you? Share this page on social media and let your friends know about Kid Rock at Hollywood Casino Amphitheatre Chicago.