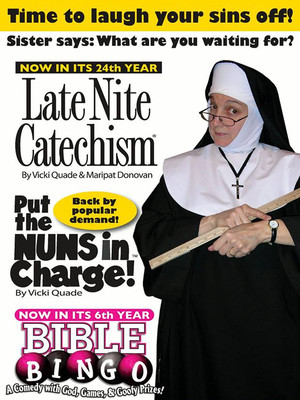 You, the audience member, are part of Sister's class. She'll take you back to the days of the Latin Mass, meatless Fridays, and remind you about that good old ruler across the knuckles! Call it Loretta Young meets Carol Burnett. This is part catechism class, part stand-up routine. It's an interactive comedy, one of the longest running shows in Chicago and U.S. theater history.

A sinfully funny night of interactive comedy - part stand-up routine, part comedy theater, and part catechism class where you're expected to participate! This hit show has taken its travelling Sisters around the USA spreading the good word about their very own blend of comedy and Catholicism. Created in 1993 by authors Vicki Quade and Maripat Donovan, the show is now in its 21st year! It is also one of the longest running productions in Chicago, and one The New York Times calls "Hilarious, well-written and inspired."

Suitable for all ages

Very funny show, makes you feel like you're back in catechism or Catholic... more

Sound good to you? Share this page on social media and let your friends know about Late Nite Catechism at Great Room - Royal George Theater.