Sorry! You missed The Architects at Concord Music Hall 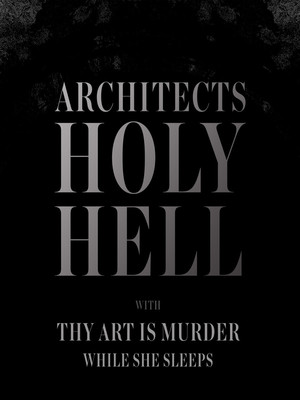 This sonic intensity and the mind-numbing light show had an euphorizing effect on people. Already in the first song break, this resulted in frenetic "Ar-chi-tects" chants from the audience.

Why See The Architects?

Architects prepare to head on tour across America, kicking off in Anaheim, California. Founded in Brighton England in 2004, the band consists of five members but was established by twin brothers Dan and Tom Searle. The metalcore band have been prominent in the metal scene ever since their inception and aren't slowing down anytime soon!

The band's latest album was released late last year, two years after the tragic death of co-founder and guitarist Tom Searle. The eighth album entitled 'Holy Hell' has been praised for representing a rise from tragedy and "a modern classic of the genre" by NME. It has also been compared to "a war between the darkness and the light" by Kerrang.

The North American leg of the tour will hit twenty states.

This concert completed a chapter of my life that I will never forget. They... more

Sound good to you? Share this page on social media and let your friends know about The Architects at Concord Music Hall.