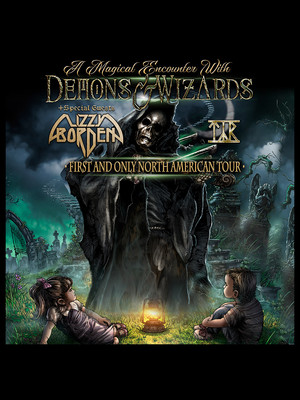 Demons and Wizards is an awesome collaboration between Hansi Kursch and Jon Schaffer that resulted in a fantastic debut album featuring great songwriting elements from Blind Guardian and Iced Earth.

Out of the unholy alliance of Floridian metal quintet Iced Earth's dark melodies and German metal quartet Blind Guardian's potent and powerful vocals arose a power metal supergroup of the ages. Comprised of Blind Guardian's frontman Hansi Kursch and Iced Earth's axe-wielder Jon Schaffer, as well as an ever evolving roster of metal's finest musicians, Demons & Wizards released their first album in 1999 and have gone from strength to strength ever since.

Currently at work on their first release since 2005, Demons & Wizards are hitting the road on their first ever tour in North America in the summer of 2019. Both Kursch and Schaffer are thrilled to bring their heady brand of black musical magic to stage and are poised to make every date a bone-shaking, legendary night to remember.

Sound good to you? Share this page on social media and let your friends know about Demons & Wizards at Concord Music Hall.