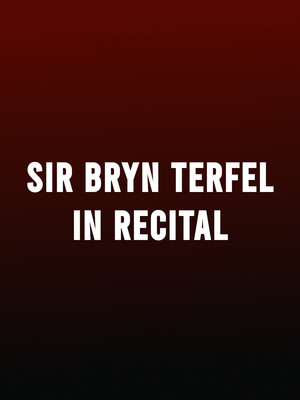 his performances appear absolutely effortless - he conveys so much emotion and expression that you can almost see the tilt of his head, the glint in his eye.

Sir Bryn Terfel is one of the world's most cherished singers and he returns to Chicago for the first time in many years as part of Lyric Opera of Chicago's 2019/20 season. The Welsh-born bass-baritone has delighted audiences in many of the world's most prestigious venues, his sublime voice and captivating personality cementing his status as one of the greatest classical artists of his time. February's recital will surely be one of the standout events of the year.

Brought up in the Welsh village of Pant Glas, Sir Bryn's career has seen a host of accolades including four Classical Brit Awards (Male Artist of the Year x 3 and Album of the Year) and a Grammy Award in 2013 for Best Opera Recording, performing Wagner's Der Ring Des Nibelungen with the Metropolitan Opera. Knighted in 2017 for services to music, Sir Bryn also runs the annual Faenol Music Festival in Gwynedd, Wales.

Sound good to you? Share this page on social media and let your friends know about Sir Bryn Terfel in Recital at Civic Opera House.