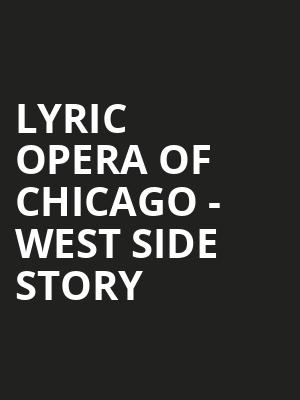 Perhaps the most striking aspect of it is the sweep and vitality of the dazzling Jerome Robbins dances that the kids of the seamy West Side do. Here is conveyed the wild emotion that burns in these youngsters' tough, lithe frames. Here are the muscle and

Why See Lyric Opera of Chicago - West Side Story?

Composed by classical icon Leonard Bernstein with lyrics by musical theater legend Stephen Sondheim, the musical first debuted on Broadway in 1957 to rave reviews, a critical success that only grew over the decades with each revival, tour, and adaptation.

Bernstein's memorable score is an eclectic fusion of nimble, jazzy riffs, romantic lyricism, bold humor and operatic tragedy, tied up in the lyricism and rhythm of the language of the streets. Added to the winning formula of Sondheim and Bernstein's genius is the kinetic mastery of Jerome Robbins, whose glorious choreography employs balletic explosions and snapping fingers to create tension between the rival gangs. A co-production between Lyric Opera Of Chicago, Houston Grand Opera and Glimmerglass Festival, the modern masterpiece enjoys a returns to the Civic Opera House for 2023, following it's highly acclaimed 2019 debut.

What is West Side Story About?

Based on classic romantic tragedy Romeo and Juliet, West Side Story transports the action to New York's Upper West Side neighbourhood in the 1950s, before urban renewal made it what it is today. The blue-collar neighborhood is home to two warring teenage gangs, namely the Puerto Rican Sharks and the Caucasian Jets. Caught up in the midst of their rivalry, former Jets member and best friend of the gang's boss Tony falls hard for Maria, the sister of Bernardo, leader of the Sharks. Star-crossed and fated for tragedy, their breathtaking story intertwines with the American dream of old for a musical theatre experience like no other.

MJB: “Brilliantly staged and performed in every way. Surpasses all expectations.”

An experience you will never forget. Cannot recommend too highly. more

Maria was fantastic! Anita was fanominal! Go see it you will definitely... more

Sound good to you? Share this page on social media and let your friends know about Lyric Opera of Chicago - West Side Story at Civic Opera House.