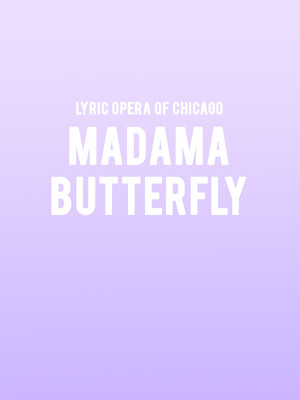 I must have her, even though I injure her butterfly wings.

A staggering tale of betrayal and heartbreak, Puccini's 1904 opera remains the jewel in the crown of the repertoire, with themes that resonate through the ages, set to a stunning and unforgettable score. The story of an American Naval Officer Pinkerton and his young Japanese bride Cio Cio San, Madama Butterfly never fails to sweep you up in a story of romance and all-consuming sadness that follows when Pinkerton abandons Cio Cio and leaves her a slave to hope.

One of the most widely recognized operas in the world, it has spawned many adaptations in the 110 years since its premiere at La Scala. The  2019/20 season will see the Lyric Opera present this extraordinary rendition of this bittersweet tragedy, with the most memorable climatic scene in the canon.

Two hours and 55 minutes with one intermission

Sound good to you? Share this page on social media and let your friends know about Lyric Opera of Chicago - Madama Butterfly at Civic Opera House.