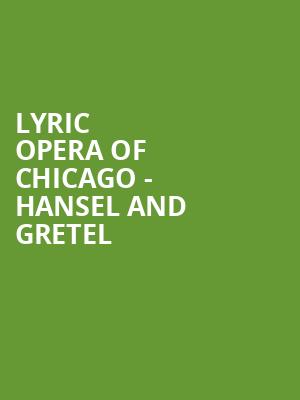 Photo by Customerbox on Unsplash

A wonderful introduction to opera for audiences of all ages

Why See Lyric Opera of Chicago - Hansel and Gretel?

back by popular demand

One of the Lyric Opera of Chicago's most favored productions, Hansel and Gretel returns to the Civic Opera House by popular demand! A glorious confection of fairytale whimsy originally directed by Richard Jones, Eric Einhorn steps in to direct this revival, with original sets and costumes by John McFarlane. Sumptuous and stunning, step deep into the forest with Hansel and Gretel as they encounter a wild, dark world where anything could be lurking behind the next tree.

What is the story of Hansel and Gretel?

After being sent into the haunted forest by their mother to pick strawberries, the young Hansel and Gretel fall prey to its biggest terror. Captivated by a strange house made of candy and gingerbread the hungry children soon start nibbling, only to realize that this is the house of the Wicked Witch, who loves to cook children and eat them. Will they outsmart her and escape the woods? Find out in this folk-inspired sugary hit!

Two hours 20 minutes with one intermission

Seen Lyric Opera of Chicago - Hansel and Gretel? Loved it? Hated it?

Sound good to you? Share this page on social media and let your friends know about Lyric Opera of Chicago - Hansel and Gretel at Civic Opera House.