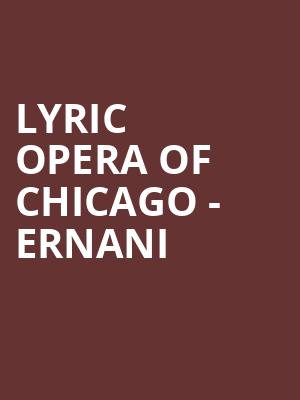 Photo by Pascal Riben on Unsplash

The next saga in the acclaimed Verdi Series

The Lyric Opera of Chicago lay on a sumptuous treat to open the 2022/23 season, continuing their critically acclaimed Verdi Series with this gem based on a tale from Victor Hugo. A tale of romance and adventure, join the Nobleman turned bandit Ernani as he tries to rescue his lover Elvira from the clutches of two immensely powerful suitors.A saga on a level with Hugo's famous Les Miserables, watch as the fate of Ernani's rescue mission soon becomes entwined with the fate of the country itself.

The first opera to be fully recorded, Ernani thrills with a lush and theatrical score that accompanies the action as it moves towards its unmissable finale.

After his lands are seized former Nobleman Ernani is now in hiding as a bandit, where he bemoans his fate to his fellow rogues; he is in love with the beautiful Elvira who is due to be married to the King of Spain. Deciding the only thing for it is to kidnap her to save her from this fate, Ernani sets off a chain of events that cannot be undone, leading to an outcome he could never have Imagined.

Seen Lyric Opera of Chicago - Ernani? Loved it? Hated it?

Sound good to you? Share this page on social media and let your friends know about Lyric Opera of Chicago - Ernani at Civic Opera House.