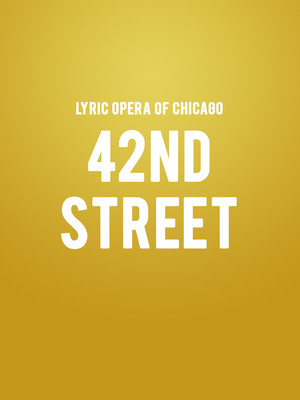 When the young and talented starlet, Peggy Sawyer, leaves Allentown for New York City, she has only one goal in mind: to make it on Broadway. Armed with her tap shoes and steely determination, her flair for performing gets her noticed by Julian Marsh, Broadway's hottest director who gives her a chorus role in Pretty Lady. But the star of the show, Dorothy Brock, doesn't like Marsh's new chorus recruit, which makes show life difficult for Peggy.

However, when Dorothy is injured, the show is all set to close unless they can find a lead good enough to take her place. Cue Peggy!

Peggy's big break is what dream are made of and set to the glitzy backdrop of 42nd Street, this fabulous show is a true Broadway spectacle and one you'll be tapping and singing along to all night long.

42nd Street was originally written as a book by novelist and screenwriter, Bradford Ropes in 1932. It was adapted to a musical stage production the following year and produced on Broadway by David Merrick.

Two hours and 30 minutes with one intermission

Sound good to you? Share this page on social media and let your friends know about Lyric Opera of Chicago - 42nd Street at Civic Opera House.