Sorry! You missed Alter Bridge and Skillet at The Chicago Theatre 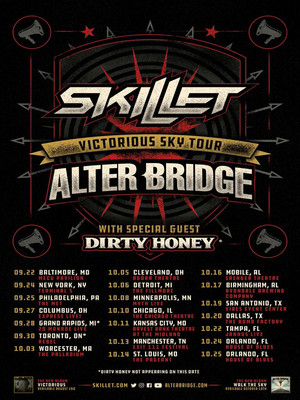 For over 15 years, Alter Bridge have been known for blurring the line between hard rock and heavy metal. Building upon the sound that has won the band worldwide critical acclaim and a devoted global fan base.

Why See Alter Bridge and Skillet?

The Talents of Alter Bridge, Skillet and Dirty Honey Combined

Three amazing rock bands are definitely better than one and this Fall, you can see three amazing acts on one stage. Florida natives Alter Bridge, Christian rock veterans Skillet and new band on the rock scene Dirty Honey will join forces for an unmissable co-headlining nationwide tour. You'll go as a fan of one band and leave as a fan of three!

Alter Bridge are preparing for the release of their highly anticipated sixth studio album 'Walk The Sky' on 18th October. The band released their debut in 2004 and it reached the number 5 spot on the U.S. Billboard 200 chart. Their 2007 single 'Blackbird' from their album of the same name featured a dual guitar solo named "the greatest guitar solo of all time" by British music making magazine Guitarist.

Skillet formed in Memphis in 1996 and have received many accolades and awards for their work over the years, including a Grammy nomination for Best Rock Gospel Album for the band's 2005 album 'Collide.' Their tenth album is set to be released on 2nd August this year.

After opening for Red Sun Rising and The Who earlier this year, L.A rockers Dirty Honey are ready for their first co-headlining tour, which comes just after the release of their debut self-titled EP.

Jeremy: “Skillet blew me away”

the others were ok, but Skillet was incredible... they just made a new... more

Dirty Honey should have stayed home, they were boring. When you have to... more

Sound good to you? Share this page on social media and let your friends know about Alter Bridge and Skillet at The Chicago Theatre.