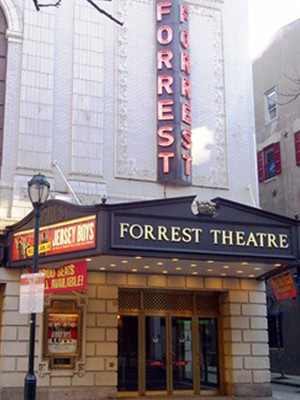 You can catch Jersey Boys at Forrest Theater in Philadelphia, showing Apr 18 - 23, 2023

Jersey Boys is also touring to:

Jersey Boys is dynamically alive in music while, as a drama, it catches the very texture, almost the smell, of its time.

Oh, what a night!

How did a group of blue-collar boys from the wrong side of the tracks become one of the biggest American pop music sensations of all time?

Jersey Boys is the smash-hit jukebox musical that gives us the true, sometimes gritty and always spectacularly entertaining story of falsetto idol Franki Valli and The Four Seasons. The blue-collar boys in the shiny Lurex suits strode onto the scene in 1965, wowing the public for 20 years with hits such as "Big Girls Don't Cry","Oh What a Night", "Walk Like a Man," and many more. But before fame and fortune, comes a difficult, and sometimes not entirely legal, journey to stardom.

Created by Marshall Brickman and Rick Elice, they wanted to create a traditional documentary-style story of the blue-collar stars and Jersey Boys came from interviews with the surviving members of the band, cemented by Tommy Devito's addition: "Don't listen to those guys. I'll tell you what really happened."

Since its debut in 2005, Jersey Boys has become a must-see, embedding itself in the American musical theater landscape, playing over 3,000 performances and winning 4 Tonys on Broadway and proving that the rags to riches, to rags again, story is an ever-enduring theme!

I'll tell you what really happened

Told in 4 parts, each member has an act to tell their side of the story, even if it clashes with the others. We get the real story of Franki Valli and the Four Seasons, from humble beginnings to the thrill superstardom and back again, via loan sharks, jail time, tense dealings with the Mob, and the strength of friendship, sound-tracked by the irresistibly recognizable hits that keep you coming back for more.

The Four Seasons sold over 175 million records worldwide, all before 30 years old!

Jersey Boys may be inappropriate for children aged 12 and under (strong language).

Two hours and 30 minutes with one 15 minute intermission.

Best Book of a Musical: Rick Elice and Marshall Brickman

Outstanding Book of a Musical

Outstanding Director of a Musical

Outstanding Director of a Musical

Distinguished production of a musical

I surprised my husband yesterday for his birthday with tickets. We attended... more

Sound good to you? Share this page on social media and let your friends know about Jersey Boys at Cadillac Palace Theater.