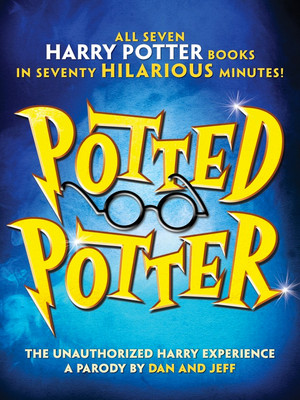 It takes some kind of wizardry to make a theater full of people snort and whoop with laughter for 75 minutes.

With the release of Harry Potter and The Deathly Hallows came an end to the beloved saga of the boy wizard and the ultimate struggle of good against evil. Many a fan was distraught at the story's conclusion, having to say goodbye to the truly immersive magical world hidden right under our muggle noses. Yet true Potterheads can live the golden years of Pottermania by catching Dan and Jeff's revival of Potted Potter: The Unauthorised Harry Experience.

Distilling seven books into 70 minutes is no mean feat, but hold on to your wizard hats ladies and gents, because this two man production is a fast paced, thrill ride that will have you spellbound and roaring with laughter. Former BBC TV hosts Daniel Clarkson and Jefferson Turner first found themselves parodying Potter in 2005, when they were asked to come up with a five minute recap of the first five books. What started as entertainment for fans waiting in line for the release of the sixth book snowballed into a full show, world tours and even an Off-Broadway run!

What is Potted Potter About?

Perfect fun for the whole family, Potted Potter is a madcap summary of all seven beloved Harry Potter books, from the humble beginnings of The Philosopher's Stone to the harrowing final battle of The Deathly Hallows. With a myriad costume changes, and the aid of more than a prop or two, Dan and Jeff will conjure everyone from the hooked-nosed Snape to the erudite Hermione. Wands at the ready!

70 minutes with no intermission

Sound good to you? Share this page on social media and let your friends know about Potted Potter at Broadway Playhouse.