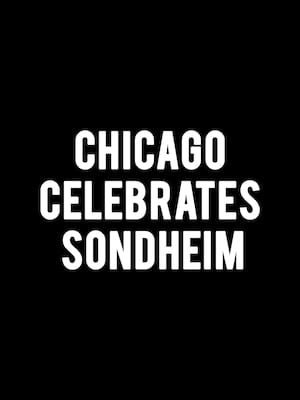 Here was Sondheim singing in which every turn of phrase and interpretive choice had been carefully thought out, as if performed by a formidable stage actor."

Truly one of America's (and the world's) greatest living composers, icon Stephen Sondheim has changed the face of musical theatre with his ambitious stagecraft and rhapsodic lyrics. The beloved creator has thus far been awarded with an Oscar, eight Tonys (the most a composer has ever been awarded), eight Grammys, a Pulitzer, an Olivier and the Presidential Medal of Freedom for his considerable efforts, which range from the gloriously gory Sweeney Todd to fairytale caper Into The Woods and more!

Join the city of Chicago as it pays tribute to Sondheim during his 90th birthday season this fall. For one special night only, the Chicago Philharmonic, conductor Rich Daniels and celebrated local vocalists join forces at the Auditorium Theatre under the direction of Chicago songstress and foremost Sondheim interpreter Joan Curto. Together they'll be performing a smorgasbord of classics, including selections from Merrily We Roll Along, West Side Story, Follies and Sunday In The Park With George.

Sound good to you? Share this page on social media and let your friends know about Chicago Celebrates Sondheim at Auditorium Theatre.