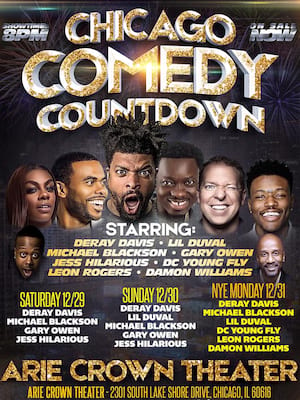 Why See DeRay's Comedy Count Down Festival of Funny?

Swing Into The New Year With Funnyman DeRay Davis

Iconic African American funnyman DeRay Davis is back for another year of belly laughs during his annual Comedy Countdown at Chicago's Arie Crown Theater. For four special days, the host with the most will invite a evolving line-up of the country's greatest comedians to help him count down to 2020, concluding with a special New Year's Eve spectacular.

This year, Davis is pulling out all the stops and inviting the likes of Michael Blackson, Lil Duval, Rickey Smiley, Red Grant, Bruce Bruce, Leon Rogers and Jess Hilarious to the stage. To top it off, he'll receive hosting assistance from Black Ink Crew's Sky Days and the one and only former undisputed heavyweight champion of the world Mike Tyson. Please check with the venue for each evening's specific line-up of comedians.

Sound good to you? Share this page on social media and let your friends know about DeRay's Comedy Count Down Festival of Funny at Arie Crown Theater.